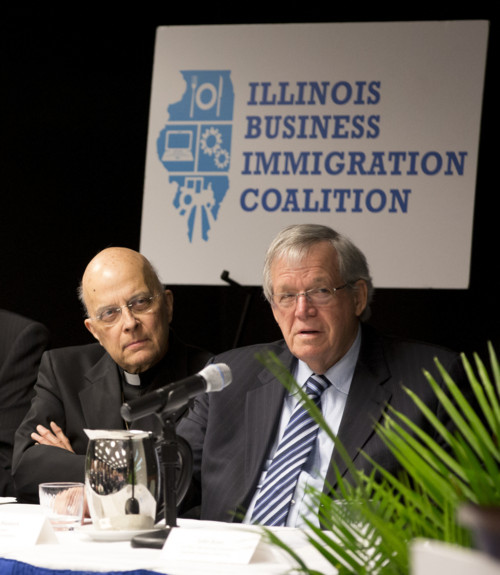 Fr. Brendan helped create and now serves on the steering committee of the Illinois Business Immigration Coalition (IBIC) which in February sponsored a panel at DePaul University. Panelists included Chicago’s Cardinal Francis George and former U.S. House Speaker Dennis Hastert. A Republican, Hastert called for legalization of the 11 million undocumented immigrants living and working in the country. “My own party must acknowledge and embrace ever-growing Latino and Asian constituencies,” he said. “We should provide them with a path to citizenship.”

Cardinal George made the moral case for immigration reform and deplored increases in deportations. “Our churches have too many families torn apart by our immigration laws, too many good people who only want to be Americans, to work and be safe in their homes. I know that our nation’s soul requires that we treat them fairly.”

The Resurrection Project and St. Pius V Collaborate for Success

The TRP award-winning project focused on purchasing, rehabbing, and selling foreclosed homes in one of Chicago’s most devastated neighborhoods, Back of the Yards. With a $13.8 million grant from the Department of Housing and Urban Development’s (HUD) Neighborhood Stabilization Program (NSP), TRP worked with local parishes and organizations to acquire and redevelop 40 foreclosed and vacant properties. To complement its rehab efforts, TRP provided financial literacy classes and homeownership workshops to strengthen the families purchasing the renovated buildings. As the buildings were rehabbed, other homeowners took heart and began fixing up their own properties, reflecting a new found hope for the resurrection of their community.

On Saturday, February 15, St. Pius V hosted a citizenship workshop sponsored by The Resurrection Project and other organizations. Among the 150 persons attending, more than 100 filed their application for citizenship. At the workshop, Second Federal Credit Union, a TRP partner, announced it would provide non-collateral backed loans to persons to cover their $680 application fee. It is the only financial institution in Illinois providing this service.

Illinois has an estimated 350,000 legal permanent residents who have lived here long enough to become citizens (at least five years) but have never applied, many for lack of funds.

Each year, classmates choose students in their classroom who live out Doctor Martin Luther King Jr.’s message of non-violence. We are very proud of all our 2014 Peacemakers. Here is a sample of what the children say about their peers when nominating them for this award:

The recipient of the award for the Early Childhood Education program was Ian, about whom his classmates said: “Ian is quick to say ‘sorry’ when he makes a mistake. He gives hugs and always tries to be nice.”

Fourth grader Isabelle’s classmates said that she is “respectful and treats everybody equally. She not only brings peace to her classmates but also to teachers.”

This year at Noche Mexicana we will celebrate the successes of two of the schools greatest assets: our principal, Nancy Nasko, and our administrative assistant, Abby Torres. Both received major awards this year recognizing their contributions to SPV School.

Abby received the Distinguished Service Award from the Archdiocese of Chicago’s Office of Catholic Schools. Abby is one of the reasons everything runs so smoothly in the school office. She does her job with grace, calm, and a wonderful sense of humor.

At Noche Mexicana, Mrs. Nasko will also be honored for receiving the Distinguished Principal Award from the National Association of Elementary School Principals last fall. Congratulations to Nancy and Abby!

You are invited to join us on May 1, 2014, for the 8th annual St. Pius V School scholarship fundraiser, Noche Mexicana! We will return to the energizing atmosphere of Carnivale, 702 W Fulton St., Chicago, IL 60661, for our celebration and silent auction.

Choosing Catholic education can be difficult. Our parents make sacrifices to enroll their children in St. Pius V School. Without the scholarship funds that Noche Mexicana provides, our school would not be an option for many students. Your participation has a direct, positive impact on the lives of our students and their families.