Jesus said to them, “Let the little children come to me; do not stop them; for it is to such as these that the kingdom of God belongs.” Mark 10:14

It is a nearly 3,000-mile journey from Southern Honduras to the southernmost tip of Texas, a region called the Rio Grande Valley, where most unaccompanied migrant children from Central America enter the United States. Over 50,000 children have already arrived in 2014. Most children begin their journey by bus, often accompanied by a coyote, or human trafficker, which costs a few thousand dollars. They stop at safe houses along the way that are usually crowded. An unaccompanied child is one who lacks immigration status, is under 18, and who is present without a parent or legal guardian. The average age is dropping: children under age 10 are now making the dangerous journey predominantly from El Salvador, Guatemala, and Honduras and Mexico.

Why are they coming?

Honduras and El Salvador, where there are more gang members than police officers and extreme violence, cannot adequately protect children, who are left extremely vulnerable (93% of crimes perpetrated against youth go unpunished). Many children leave for the possibility of family reunification and/or in search of educational and economic opportunities. Mexico has no foster care system for asylum-seeking children and a lack of children’s shelters. The children are often left in detention centers with adults or they seek deportation to try again.

48% of children are affected by violence from drug cartels, gangs or the state.

21% of children survived abuse and violence in the home.

38% of children from Mexico are exploited in the criminal human trafficking industry.

Up to 72% of children may have more than compelling reasons to receive asylum.

What are they risking to come here?

The journey north to the border finds children in danger of drug traffickers, human traffickers, corrupt law enforcement, and gang activity. Girls are routinely raped on the journey and gang violence along the route is common. The children who are able to cross into the United States are being held in detention centers at the border and at other federal facilities, such as military bases. Immigration policy does not require the state to supply an attorney, often leaving children dealing with trauma to represent themselves in deportation hearings.

Pray for the children and their families.

The parish youth group pitches in at the kermes.

For the first time, the parish will host only one Kermes this year, opting to run the festival for three days and offer beer and wine to increase our revenue. We also added carnival rides and games that were very attractive to families with children, and we continued the tradition of showcasing Aztec dancers, regional music from Mexico and other cultural programming.

As always the car raffle was the highlight of the event. Araceli Lucio, the health coordinator at our sister agency, The Resurrection Project was the winner of the cherry red For Mustang.

The Archdiocese of Chicago is providing six million dollars worth of scholarships to help Chicago students gain access to great Catholic schools like St. Pius V!  Through the Caritas Scholarship program funded by the “To Teach Who Christ Is” campaign, St. Pius V can now offer a limited number of reduced tuition scholarships for students who transfer from public schools. Qualifying students may receive a scholarship that will pay for up to 50% of their tuition for three years. Only a few of these scholarships are still available, so please contact the school today to request more information. You may call the school office at (312) 226-1590 or visit www.saintpiusv.org to fill out an interest form. Don’t miss out on this incredible opportunity! 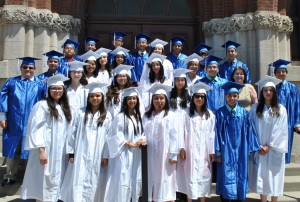 We offer our prayers for a bright future to the St. Pius V School graduating class of 2014. These students have worked hard and accomplished great things already. Soon they will begin their journeys through high school, college and beyond.

“The path we choose for the next eight years — high school and college —- may not be easy,” said graduating 8th grade student Madalyn Torres, “but we should not give up. For what we put into our education will help us to make our career.”

The graduates will attend some of the city’s top high schools, including St. Ignatius College Prep, Whitney Young, De La Salle, Holy Trinity, UIC College Prep, and Our Lady of Tepeyac, among others. Congratulations, Class of 2014! We are proud of you. 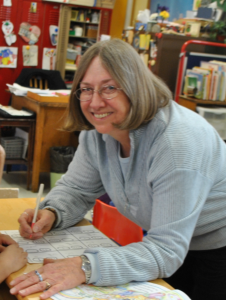 Ms. Elizabeth Lucarelli has completed 20 years as our kindergarten teacher , having spent her 42-year teaching career in Catholic schools. “Liz Lucarelli has a passion for helping young students fall in love with school,” said principal Nancy Nasko. “In kindergarten, she readies the children for the rest of their school career. It is a critical age and she is the best at capturing young minds and getting them excited about learning, we are grateful for her service.”

Your child or a child you know can benefit from St. Pius V School’s long, rich tradition of educational excellence and service to our community. Many of our students are children of alumni, attesting to the enduring value of a St. Pius V education.

Call us today to enroll your child, and encourage families you know to consider St. Pius V as a great option for their children. Remind them that our graduates go on to attend the top high schools in the city. Please visit www.saintpiusv.org to complete an interest form or call (312) 226-1590 to request a tour.

Noche Mexicana: What a Fiesta!

Thank you to all of the sponsors, donors, friends, and volunteers who helped make our 8th annual Noche Mexicana a huge success! We had a fantastic time raising funds for student scholarships and celebrating Ms. Abby Torres and Mrs. Nancy Nasko, both of whom recently won prestigious awards. Your generosity means more students can study at St. Pius V and benefit from a safe, excellent education. Thanks for funding the dreams of the next generation of parish leaders!

Missed the opportunity? Call 312.226-1590 to learn how you can make a world of difference by supporting the St. Pius V School scholarship fund. 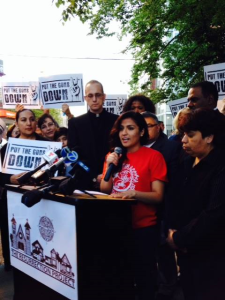